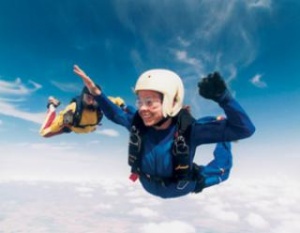 I am extremely thankful to the Wright Brothers, Orville (August 19, 1871 – January 30, 1948) and Wilbur (April 16, 1867 – May 30, 1912). As aviation pioneers they are credited with inventing and building the world’s first successful airplane and making the first controlled, powered and sustained heavier-than-air human flight, on December 17, 1903 four kilometre south of Kitty Hawk, North Carolina.

My work as a Management Consultant and Executive Coach requires me to travel extensively, both in South Africa and globally. Flying is part of my life. Thanks to the pioneering efforts of these two brothers, I can live a wonderful life on the North Coast of KZN and work in Johannesburg and Cape Town by boarding a flight at King Shaka International and touching down one or two hours later at my work destination.
During my one of my many flights, the thought of safety and the role of parachutes came to mind. It reminded me of the story of one Charles Plumb, a US Navy pilot in Vietnam.

After 75 combat missions, his plane was destroyed by a surface-to-air missile. Plumb ejected and parachuted into the enemy hands. He was captured and spent six years in a communist Vietnamese prison. He survived the ordeal and went on to lecture on lessons learned from that experience.
One day, when Plumb and his wife were sitting in a restaurant, a man at another table came up and said: “You are Charles Plumb! You flew jet fighters in Vietnam form the aircraft carrier ‘Kitty Hawk’. You were shot down!”
“How in the world did you know that?” asked Plumb.
“I packed your parachute,” the man replied.
Plumb gasped in surprise and gratitude. The man pumped his hand and said: “I guess it worked!”
Plumb assured him. “It sure did. If your chute had not worked, I wouldn’t be here today!”
Plumb couldn’t sleep that night, thinking about that man. He kept wondering what he had looked like in a Navy uniform: a white hat; a bib in the back; and bell-bottom trousers. He wondered how many times he might have seen him and not even said “Good Morning, how are you?” or anything, because as Plumb explained: “I was a fighter pilot and he was just a sailor!”

The story of Charles Plumb and the sailor that packed his parachute and ensured his safety reminds me always to stay alert to all the people who pack my life parachutes every day and to stay humble in the light of their support. I would therefore like to ask the question: Who’s packing your parachute/s?
Who are the people that noticeably and sometimes unnoticeably support you in your everyday life? Who are the people who advise you, sustain you and encourage you while you navigate through life? When last have you actually given recognition to your network of parachutes?

“The true meaning of life is to plant trees, under whose shade you do not expect to sit.” ~Nelson Henderson

As with fighter pilots flying over enemy territory, people need many parachutes as we navigate the airspace of life:
A physical parachute, an emotional parachute, a mental parachute, and a spiritual parachute.
These parachutes are the people who support us as we fly through life’s unknown territories. Sometimes in the daily challenges that life gives us, we miss what is really important. We may fail to say hello, please or thank you, congratulate someone on something wonderful that has happened to them, give a compliment or just do something nice for no reason.
As we go through life this week, this month, this year let us recognise people who pack our parachutes.

In the words of Francois-Marie Arout de Voltaire, writer and philosopher of the 18th century: “Appreciation is a wonderful thing; it makes what is excellent in others belong to us as well.”
UBUNTU – I am, because you are.

7 Replies to “WHO PACKS YOUR PARACHUTE?”